Triumph Over Darkness: the Life of Louis Braille

“This book describes the life of Louis Braille who, blinded accidentally as a young boy, was sent to an institution in Paris where he devoted his life to developing the finger system for reading now used by the blind all over the world. He died at the age of 43, unknown and unhonoured. The author tells of the trials and torments Braille suffered in his attempts to perfect the system and to get it accepted.”
(Editorial review, Amazon 2008, retrieved 19th November 2008)

Out of Darkness: the Story of Louis Braille 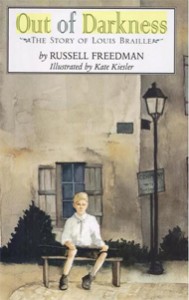 “An extremely well-written and informative book that tells about Braille’s life and the development of his alphabet system for the blind. Freedman’s gift for making his subjects both accessible and intriguing comes through wonderfully in this book. Readers learn not only about Braille and his struggle to communicate through the written word once he lost his sight, but also how long it took for his revolutionary innovation to become universally accepted. They also become aware of how isolated the blind were before his invention.”
(Editorial review, Amazon 2008, retrieved 19th November 2008)

Louis Braille: a Touch of Genius 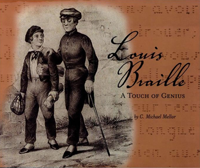 “Thoroughly researched and charming, this coffee-table book is overstuffed with pictures, letters and every type of Louis Braille memorabilia available. Unabashedly admiring, the author acknowledges his goal is not to write a “pathography” of Braille, and indeed, readers will find none of Braille’s hidden vices (nor any hints of their presence) to enliven this life story. But Braille’s life in the middle of the 19th century provides a rich story: a man who, blinded during boyhood, devoted himself to teaching other blind people better ways of negotiating their world. In addition to devising the raised-dot alphabet, Braille also set up a system for musical notation and built printing machines for his alphabets”.
(Editorial review, Amazon 2008, retrieved 19th November 2008)

Summary: Bina features some highlights during the War of the Dots when proponents of New York Point, a unique “point” or tactile writing system created by William Bell Wait of the New York Institution for the Blind, and those in favor of American Braille, a system that was based on Louis Braille’s original code and similar to English Braille devised in part by Edward E. Allen of the Perkins Institution, staged one of the most contentious battles in the field.

Summary: A profile of the life and death of Louis Braille.

Braille: A New Dictionary of Eponyms

Summary: A profile of Louis Braille and a summary of how the Braille system became recognised across the world.

Review of Out of Darkness: The Story of Louis Braille

Summary: Elleman reviews “Out of Darkness: The Story of Louis Braille” by Russell Freedman and illustrated by Kate Kiesler.

Review of Louis Braille: A Touch of Genius

Summary: The Canadian National Institute for the Blind produced a clever videotape on the life of Louis Braille that was designed to be shown to children at the mid- to upper-elementary grade levels. Braille’s code was not simply a change from Barbier’s 12 dots to the 6 dots of braille; there are fundamental and important differences in Braille’s code.

A Tribute to Louis Braille

Extract: “Louis Braille was born on January 4th, 1809 in Coupvray, near Paris in France to Monique and Simon Braille. At the age of three Louis lost his sight in an accident involving one of his father’s sharp tools. Infection of the injury spread to the other eye, leaving him completely blind. Despite his unusual handicap, Braille propelled himself to the top of his elementary class. A creative and clever young boy, Louis soon adapted to life without sight…”.